User registration is disabled in this demo.

Please enter your username or email address. You will receive a link to create a new password via email.

The King Of The Dinosaurs 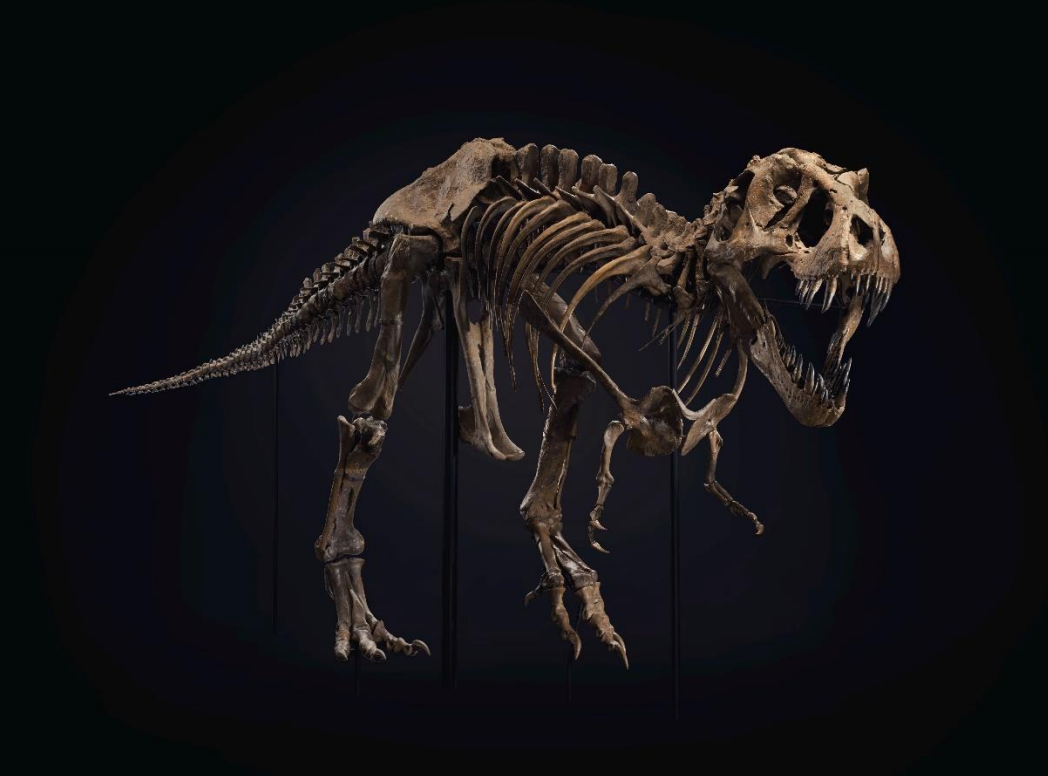 CHRISTIE’S TO OFFER ONE OF THE LARGEST, MOST COMPLETE, AND WIDELY STUDIED TYRANNOSAURUS REX SKELETONS ON EARTH

NEW YORK – On October 6, Christie’s will offer one of the largest, most complete and widely studied Tyrannosaurus rex skeletons ever discovered. Endearingly named “STAN” after the paleontologist who first found the skeleton’s partially unearthed hip bones, the T. rex is an extraordinary surviving specimen from approximately 67 million years ago.

The skeleton comes to auction from the Black Hills Institute in South Dakota, where the T.rex has been displayed and studied for the last two decades, and has inspired dozens of academic articles and studies within the paleontological community. After a meticulous museum-quality re-mounting, STAN the T. rex will be unveiled for the public on September 16, 2020 at Christie’s Rockefeller Center in New York and offered as a highlight of Christie’s Evening Sale of 20th Century Art on October 6 with an estimate of $6-8 million. More information on the Evening Sale may be viewed here.

James Hyslop, Head of Department, Scientific Instruments, Globes & Natural History, Christie’s: “We are honoured to be bringing STAN to auction and to have been entrusted with the stewardship of such and iconic and important T. rex. I’ll never forget the moment I came face to face with him for the first time, after his remount in Colorado – he looked even larger and more ferocious than I’d imagined, a specimen that only further establishes the T. rex’s position as the King of Dinosaurs.”

STAN will be exhibited in a first-of-its-kind extended public preview at Christie’s in midtown Manhattan. From September 16 through October 21, STAN will be fully visible 24 hours a day through Christie’s floor-to-ceiling gallery windows from the sidewalk on 49th Street between 5th and 6th Avenues. This special viewing opportunity will offer enthusiasts and pedestrians alike the chance to see and learn about one of the world’s most iconic dinosaurs in a socially distanced setting. A limited number of in-gallery viewings will be available by appointment through Christie’s booking system, which may be requested by emailing trex@christies.com. Related educational content will be made available via QR codes, which may be easily found from outside and inside the galleries. Both modes of viewing will be subject to all local public health guidelines and with all necessary measures to protect our visitors and our staff in place.

The enormous scale of STAN’s skeleton – 13 feet high and 40 feet long with the tail outstretched – demonstrates the behemoth size of the Tyrannosaurus rex. With 188 original bones, STAN is one of the largest and most complete specimens known to exist. Consistent with the skeleton, STAN’s skull is one of the most complete T. rex examples known to science, and could hold as many as 58 functioning teeth. With eyes the size of baseballs, STAN would have boasted keen vision for hunting his chosen prey.

The first bones from the skeleton were discovered in the spring of 1987 by amateur paleontologist Stan Sacrison on privately owned land in the Hell Creek Formation, part of a sprawling geological area known as the Cretaceous Badlands, spanning large areas of North and South Dakota, Wyoming and Montana. In the course of his search, Sacrison discovered dinosaur hip bones weathering out of the ground. The fossils were originally misidentified by a vertebrate paleontologist as belonging to the more commonly found Triceratops. As a result, the remains lay undisturbed for another five years until 1992, when paleontologists from the Black Hills Institute of Geological Research returned to see the “Triceratops.” The emerging bones were immediately recognized as T. rex in origin, and three months later, a thorough professional excavation ensued with the landowner’s consent.

In order to be excavated safely, each individual bone from the skeleton had to be carefully removed from the host rock, cleaned, preserved, restored and recorded. Following more than 30,000 hours of manual labor, the near-complete male fossil skeleton in a remarkable state of preservation was pieced together.

The state of the fossilized bones indicates STAN suffered a broken neck during his lifetime and survived. In the process of healing, two of his vertebrae bonded together, while a third vertebrae became immobilized by additional bone growth. Pathologies show evidence of injury or disease that the animal withstood during its life. One of STAN’s ribs exhibit a puncture wound that may have been inflicted by another T. rex.

For more than two decades, STAN has held a unique celebrity status; upon returning from a tour of Japan in 1995-1996, the skeleton was re-installed at the museum for the Black Hills Institute for public viewing. Casts of STAN’s skeleton have been produced for dozens of science and natural history museums across the Americas, Europe and Asia.

More than fifty Tyrannosaurus rex skeletons have been discovered since 1902, with the majority housed in natural history museums and paleontological institutions throughout the world. The appearance of a T. rex skeleton at auction is a significant event, made all the more special with a specimen as well-preserved and well-documented as STAN. The October 6 sale marks a rare opportunity for a collector, institution, or museum benefactor to acquire the extraordinary fossil skeleton of the celebrated King of the Dinosaurs.

Facts at a glance:

To see video of the skeleton’s installation, visit http://www.christies.com/trex

We use cookies to ensure that we give you the best experience on our website. If you continue to use this site we will assume that you have agreed to terms.OkPrivacy policy